Food is the foremost part of any trip and enjoying the local cuisine is vital to immerse in the experience of an alien country.

Eat and Drink like a Local in New Zealand

The sheep population in New Zealand is to thank for the succulent and simply delectable lamb you get there. The meat is fresh and New Zealand is raised and is not a dish you should miss out on. It is usually roasted with herbs like rosemary, garlic for spice, and accompanied with the vegetables of the season. The roast lamb at the Lake Taupo Lodge at Taupo and Pedro’s house of lamb in Christchurch are recommended to be the best in the country.

This variety of mussels is not to be found elsewhere in the world. It is unique owing to the soft shell, large and fatty meat compared to any other variety of mussels. The name comes from the vibrant green coloured shells with a shape resembling a lip. They are popularly served in New Zealand in chowder. The best place to have these mussels is in Marlborough where most of New Zealand’s aquaculture takes place. Havelock in Marlborough is known for serving the best mussels in New Zealand. 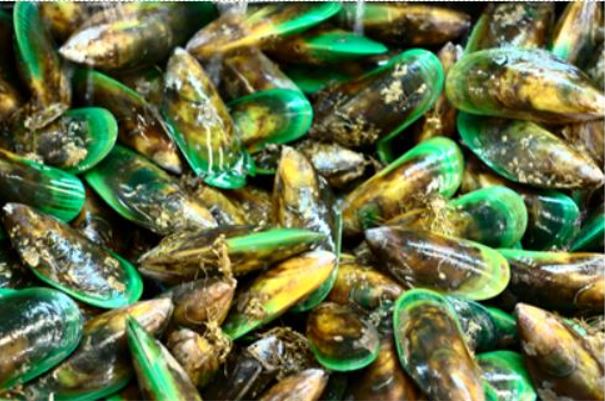 Kina is the local name for the Sea-urchin that is available in New Zealand. The texture on the outside is hard and spiky and the flesh inside is thin. New Zealanders like their Kina fried or Kina pies but the best experience of enjoying Kina is while on a boating tour in the Bay of Islands where you can catch the Kina fresh and enjoy it!

Whitebait is immature fish that are not fully grown and is a cultural delicacy in New Zealand. The most popular way to consume them is fried which makes them look like Omelets. The fish is seasonal and the best time to have this dish is the months August to November. The best place to have these fish fritters are on the West Coast of New Zealand, especially in the town of Haast. 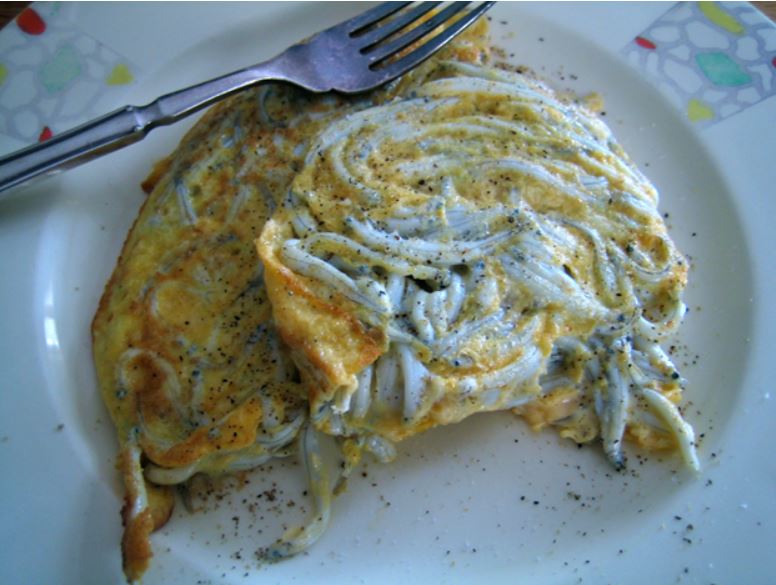 Paua is the name given by Maori to the local Sea Snail available in New Zealand. They are consumed in curries and as fritters. Fun fact is that their shells are used by many New Zealanders as ashtrays. The best place to try Paua’s is in Stewart Island off the southwest coast of New Zealand.

New Zealand is known for its blue cheese with a vintage creamy and soft texture. The best cheese brands in New Zealand are Kapiti and Whitestone among others. There are plenty of vineyards throughout the country but New Zealand is known best for the Sauvignon blanc which is seen to be the best in the world. The two best regions to enjoy wine tasting and take a stroll in the vineyard are at Canterbury and Marlborough.

New Zealand’s most loved syrupy food paste which is made out of yeast extract, herbs, and spices that accompanies bread and crackers is a must-try item. Marmite is identified to be an acquired taste and the best place to have your first experience of it is in its home country New Zealand! 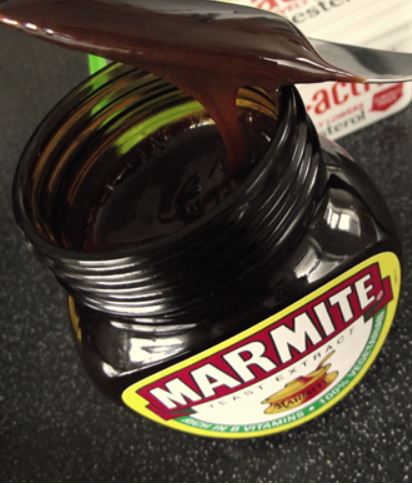 Who isn’t a fan of Ice cream? Hokey Pokey Ice cream is New Zealand’s most iconic dessert which is essentially vanilla ice cream mixed with sponge toffee (caramelised sugar). The most sought-after ice cream in New Zealand is best to have at Giapo where you will stand in a long line to get in but in the end, it is worth the wait.

The Hangi is the traditional Maori meal which cooked inside the earth on pre-heated stones and the food cooked has an earthy and smoky flavour. The meal is served only on special occasions and is a labourious process taking up to seven hours to complete. The meal consists of Chicken, Pork, Beef, Mutton, and various seasonal vegetables. For dessert, they serve the famous and delicious hangi steamed pudding. The best place to have the authentic Hangi is in Rotorua among the native Maori while experiencing all aspects of their culture.

The fruit’s origin is from China but is now a specialty in New Zealand. Its fuzzy brown outer skin and bright-green inside taste like no other fruit. It is tangy, yet sweet and incredibly delicious to devour! There is also a yellower version of the fruit that is known as the Golden Kiwifruit which is grown only in New Zealand. The fruit is loved by New Zealanders on their Pavlovas!

This drink is as New Zealand in nature as a beverage can get. The drink is named Lemon and Paeroa after the North Island town it was invented in. It tastes sweet and yet has a lemony punch to it. One can pick it up at stores and supermarkets easily. But the best experience of the drink is buying the drink and posing in front of the large bottle statue in Paeroa, Waikato 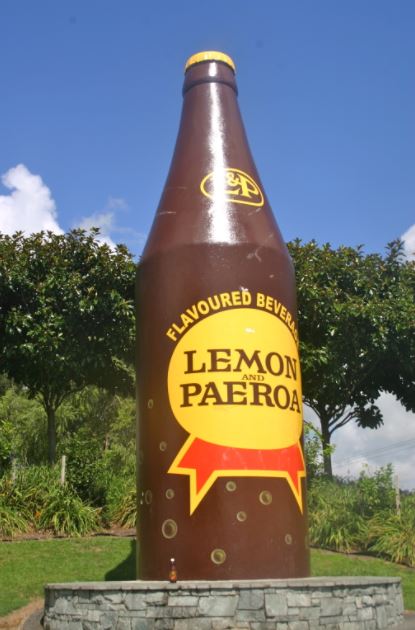 New Zealand and Australia both claim origin to this dessert, no matter which country bags the prize, the dessert is a must-have in New Zealand. Made with meringue, whipped cream, and fruits every bite is divine with its crispy outer layer and soft center. The dessert is popular during festivals like Christmas and the best places to try it out are at Floriditas in Wellington and Cibo in Auckland. 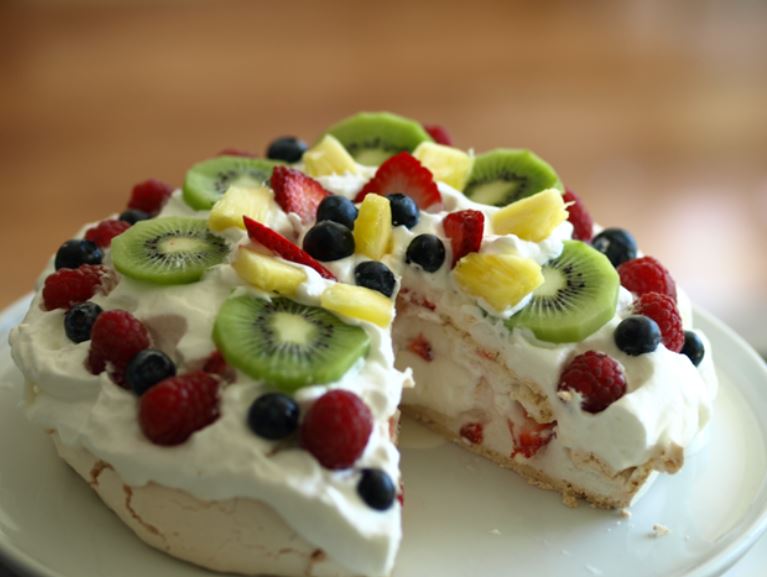 The best edible souvenir to take home from New Zealand is the fresh and tasty harvested Manuka honey in New Zealand. The honey is made from the pollen of the Manuka tree and is distinct in its heavy flavour and unique smell. The locals believe in the medicinal properties of the honey in healing sore throats. Getting the honey from a local farm or a health store is best, it is a bit pricey but the taste makes one forget the cost.

The Feijoa is a native Brazilian fruit, New Zealanders have made the fruit their own. It is also known as Pineapple Guava. The fruit is shaped like an egg and with a fruity aroma and tasty flesh. It is consumed raw, cooked in a pot with sugar, and made into smoothies. The fruit is available throughout the year in local grocery stores and supermarkets.

The kind of dessert children and adults none the less cannot give up on and indulge. It is made of candies and marshmallows. The cake is made of malt biscuits, butter, and condensed milk and it is the ultimate dessert for when your sweet tooth is craving for a sugar and deliciousness overdose! The cake is best paired with coffee and bakeries serve them across the country. 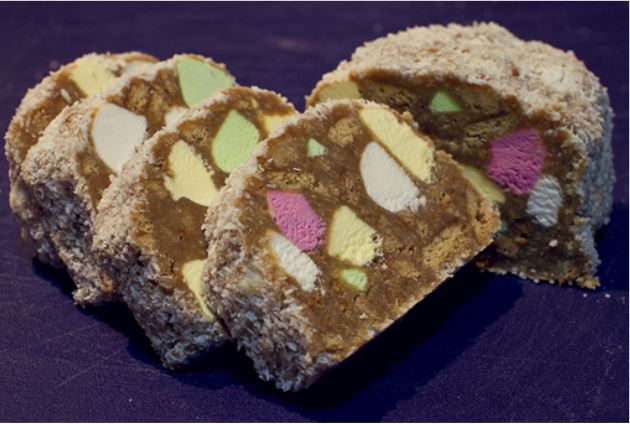